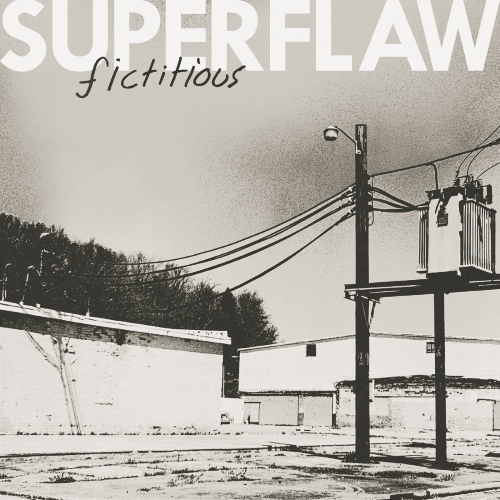 preorder the album on bandcamp

“Well Understood” is the latest single from Superflaw, the side project of Anthony Cunard, lead vocalist of Blanky, collaborating with Edward Madill from the band WYLA and Daniel Ryan, released Today January 25th as the last single from their upcoming album “Fictitious”, to be released this January 29th on Manor Records.

The track is a dirty slow waltz with a heavy bluesy edge, guitars take center stage and keep elbowing even while it’s Anthony’s turn to show up and share with us a cautionary tale of longing for the wrong person, almost as he’s headed into a deliberate car crash and he makes his best effort to keep his eyes open, as he sings in a raw, visceral howl:

and I tried so hard to avoid dependence throughout my childhood.
but I’m here with you now always up to no good.

Anthony delivers the lines in a somewhat drifting fashion, showing little regard for lyrical structure, giving the tune a stream-of-consciousness feel, as if he’s exposing an inner dialogue with us, the listeners:

and I tried so hard to show you that I could be anything you wanted.
but I’m here with you now and it’s well understood that we’ll be more later if were less in the meantime.

In conclusion, the single is a wicked yet alluring slowcore ballad, the raw emotion overflowing from the murky guitars and vocals have a strange charm in their special, untidy way, and hard as we might try, we cannot help but keep coming back for more of this.